Earlier this year I was contacted by an Interior Designer from Brisbane, seeking more information about creating an artwork for her latest project.

She had been referred to my work by a local Canberra firm, who felt that work from my previous exhibitions would suit the brief they were looking for.

A soft neutral palette with earthy tones was my design brief and the source of inspiration in a similar style to my mixed media monotypes.

Connecting to my representation of trees in my art, it was decided that this theme would be the subject of the works, music to my ears – any request that involves spending time amongst trees is a joy for me.

Gum Trees were the premise for the large scale artworks which were created using printmaking principles, and then elaborated by the addition of line work and painting into the foundation forms.

The main challenge for me was to formulate the process to ensure that the large scale works could be created in the way that I had envisioned.

This then led to months of consideration and study of the gum trees of North Canberra.

Like many others, I was dismayed to see the beautiful trees removed from Northbourne Avenue, despite the fact that this was the plan all along when Canberra was designed, so it was bound to happen at some stage.

When we first visited Canberra years ago, it was the trees down Northbourne that I fell in love with, I felt the same again when we moved here from Brisbane; it was as though I were visiting old friends. It was a pleasure to be able to focus on the same trees for this commission.

The stringy bark that collects within the branches, the coarse woody bark knots that grow as the tree ages, the thin paperbark falling gently from the trunk of the tree. All of these elements beckon to be represented through my art.

At each step of the process, Quest was involved with the evolving stage, and to my delight they decided to commission not just one but two works to be hung in the lobby.

Working through the process included pencil and pen sketches, smaller studies and finally the time came to create the works.

Each of the works are 1m x 1.5m, and I was quickly reminded of the logistical issues I had when creating my past large commission pieces, Exhale and Ebb and Flow. I realised that the workable space would need to be optimised as much as possible – meaning that there was very little working space left once the tables were brought in that I required to work on the pieces. Thanks to hubby, a workable space was formed, with a drying area carefully created within my storage room.

As long as I have space to create and draw – I am happy!

Once the works were completed, the time came for framing, which I then handed over to Nicholas Harper of Measured Framing. After more consideration and consultation, Quest decided on a dark Victorian Ash Frame, hand crafted by Nic.

They are a beautiful frame and compliment the lobby perfectly.

The Apartments were officially opened on February 21, 2019 by ACT Chief Minister Andrew Barr MLA and Quest General Manager – Franchise Operations, David Ridgewaynow. So, if you happen to be enjoying the City sights please pop into the Quest City Walk Apartments to see Stringybark Study #2 and The Grand Duo hanging in the foyer.

Sharing helps Artists the most!

Kylie Fogarty is a full time Visual Artist who lives in Canberra, Australia. A Finalist in the 2018 Grace Crossington Smith Art Award and the 2018 Lyn McCrea Memorial Drawing Prize 2018, Kylie is a Member of N.A.V.A. (Professional), AIM (Art In Miniatures - Canberra) and the Australian Society for Miniature Art (A.S.M.A). Kylie welcomes requests and exhibits her work regularly.

Beach View II off to the Framers! 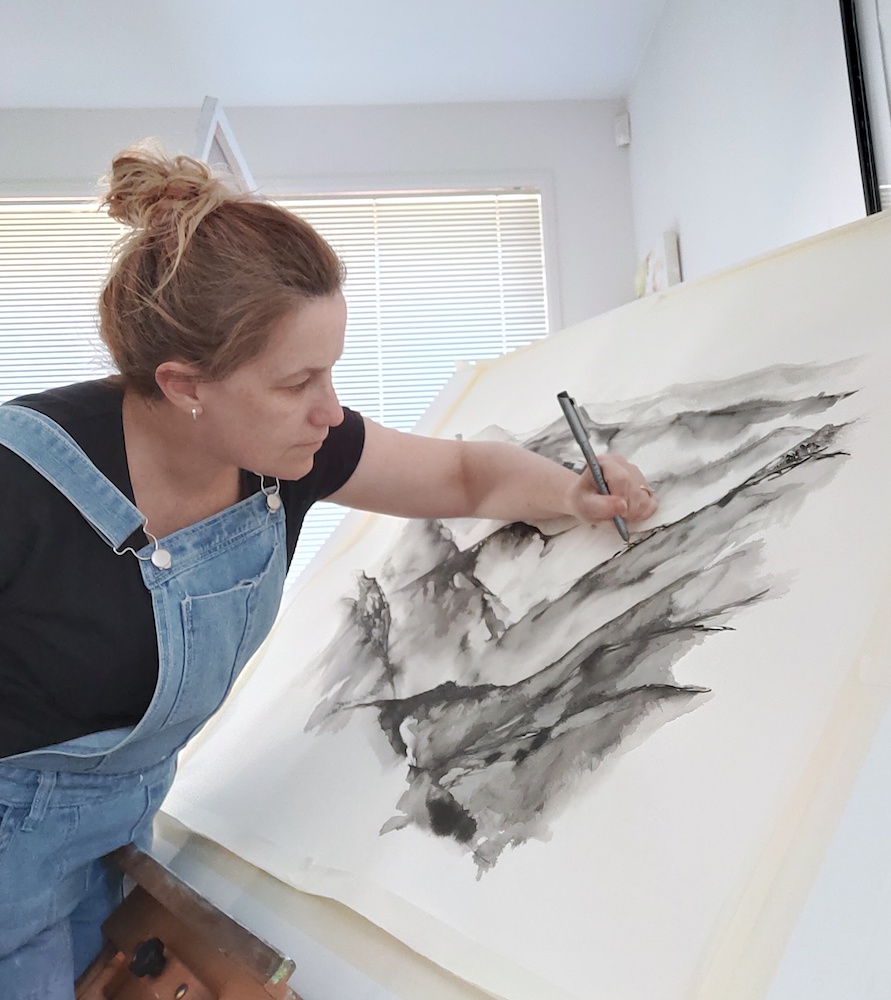 Kylie Fogarty is a full time Visual Artist who lives in Canberra, Australia. She is a Finalist in the 2018 Grace Cossington Smith Art Award and the 2018 Lyn McCrea Memorial Drawing Prize 2018, Member of N.A.V.A. (Professional), AIM (Art In Miniatures - Canberra) and the Australian Society for Miniature Art (A.S.M.A). Kylie welcomes requests and exhibits her work regularly.

A Moment in Time at The Corner Store Gallery

I acknowledge the Traditional Custodians of this land on which I create. I pay my respects to the Elders past, present and future.